All Result in One Place

Have you suffered that your PC suddenly failed to boot? What would you do if you can’t access any of the onboard recoveries or repair options? In this case, a boot disc is very useful because it can be used to perform troubleshooting tasks on an unbootable computer. AOMEI Technology released a freeware program called PE Builder to help users easily build a WinPE-based bootable media with just a few clicks.

AOMEI PE Builder is a handy tool to create bootable media based on Windows PE without having to install Windows Automated Installation Kit (WAIK). It integrates a set of tools that enables you to boot up your computer for easy maintenance and fast recovery tasks when the native system is corrupted or cannot be used. You can create Windows PE boot media in three methods: Burn to CD/DVD, Burn to USB Boot Device or Create a bootable Windows PE ISO file. Just choose one of the three media as you wish. Install PE Builder on your Windows 7, 8 or 8.1 PC and launch the PE Builder wizard to begin to create your Windows 7 boot disk or Windows 8 boot cd with a few mouse clicks. The builder program itself requires Windows 7 or 8/ 8.1 to run, but the bootable media it creates can be used on other versions of Windows too, including XP and Vista.
The Windows PE built by AOMEI PE Builder looks more like a normal Windows desktop because it comes with Windows desktop, Explorer, start menu, and taskbar. This makes it easy and effortless for you to manage files and documents, just like using Windows 7. Just as the follow picture: 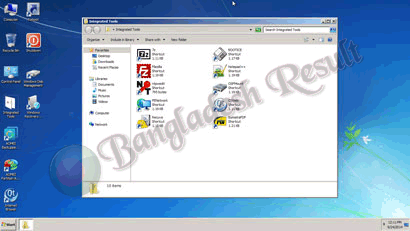 Other than that, free backup software – AOMEI Backupper Standard, AOMEI Partition Assistant Standard, and Windows Recovery Environment are included by default for recovering readable data and examining partitions, along with other useful extras. You can also embed 3rd party portable tools such as 7-Zip, Notepad++, Q-Dir, Recuva, SumatraPDF, FileZilla, QTWeb, BOOTICE, NTPWEdit and OSFMount to the Windows PE by ticking the checkboxes. You can also add your own portable apps and files here too. Note that you can only add the driver files whose extended file name is “.inf”.

Besides, the Windows PE created by AOMEI PE Builder can connect to the network in most cases. Through the network, you can antivirus off-line and maintain a system for convenience. For example, you can easily backup system to NAS or network shared directory.

A bootable media is necessary for every one of us to manage hard drives, backup data in the event of system failure or fix Windows issues. Free recovery media isn’t too hard to find, but AOME PE Builder will appeal to anyone who’s looking for a friendly recovery environment just similar to Windows itself. It is fast and easy enough for first-time users with basic Windows skills. All in all, AOMEI PE Builder is the best Windows bootable media available.